BITUMEXPORT: Additives and materials for asphalt and waterproofing

Gilsonite is used as a performance-enhancing agent for asphalt mixes. Gilsonite-modified paving mixes achieve higher PG grades and incorporate perfectly into the asphalt blend with no need for high shear milling as is the case with many other modifiers. Gilsonite-modified asphalts have higher stability, reduced deformation, reduced temperature susceptibility and increased resistance to water stripping than non-modified asphalts. Gilsonite is also used to make both solvent-based and emulsion pavement sealers with superior appearance and weathering properties. 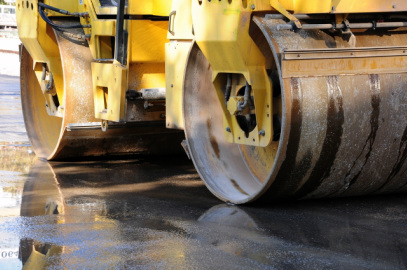 Gilsonite is often used by asphalt producers, road paving engineers and paving contractors who are concerned with PG specifications, high-performance and cost-effectiveness. Gilsonite, long known as a bitumen re-enforcer and strengthening agent, also offers a unique combination of high-performance and economy for high-stress paving, and preservation applications. Gilsonite is an approved mineral by the U.S. Food & Drug Administration for use in resinous and polymeric coatings that come into direct contact with food. Gilsonite falls under Section 175.300 (formerly Section 121.2514) of the FDA regulations, Part 3, subpart (iv), which lists Gilsonite as one of several approved natural resins. Besides being non-toxic, Gilsonite products are non-carcinogenic and non-mutagenic.
According to FHWA (U.S. Federal Highway Administration) research data, up to 80% of pavement flexibility is lost during the first 5 years. When the aging process is halted and the pavement is preserved early on, maintenance is less invasive and much less expensive.
Furthermore, FHWA, FAA (Federal Aviation Administration), NAVFAC (Naval Facilities Engineering Command), MDOT (Michigan Department of Transportation), and AzDOT (Arizona Department Transportation), research shows agencies who used Gilsonite-based treatments reduced pavement replacement costs by up to 60% compared to using the worst first-practices.
While HMA (Hot Mix Asphalt) pavements perform poorly when they become hard (like cement), when Gilsonite is applied to the surface of asphalt pavement it maintains oils, resiliency, and flexibility by filling micro-voids and keeping asphalt binders soft and pliable. The use of Gilsonite lowers viscosity by over 30%, increases ductility by 30%, and increases Marshall Stability by almost 40% (strength of binder) after just 5 years. Contrary to many engineers’ belief, Gilsonite does NOT harden pavement. However, it DOES toughen the surface to better withstand traffic and the aging process. The stability of Gilsonite-fortified pavements makes them more resistant to problems, such as rutting and shoving, and increases the pavement’s load carrying ability. In some cases these high-performance mixes will halt, and reverse the effects of aging and degradation from water penetration, oxidation, and UV radiation. In addition, other benefits include increased resistance to water stripping, oxidation and the aging process.