BITUMEXPORT: Additives and materials for asphalt and waterproofing

Gilsonite is used in drilling mud fluids and oil well cementing. Gilsonite, in a range of softening points and particle sizes, is a standard ingredient in oil-based drilling muds used in shale and other difficult geological formations. more <...> 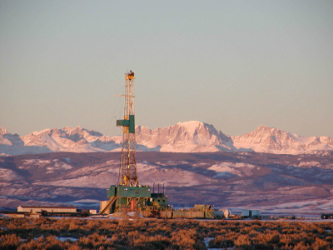 Gilsonite is used in drilling mud fluids and oil well cementing. Gilsonite, in a range of softening points and particle sizes, is a standard ingredient in oil-based drilling muds used in shale and other difficult geological formations. The addition of specially-treated Gilsonite to water-based drilling fluids helps minimize hole washout by stabilizing troublesome shale, and seals off highly permeable sands while reducing torque and drag. The addition of Gilsonite to oil well cements reduces slurry weight without loss of compressive strength and acts as an effective bridging and plugging agent to seal fractures in weak formations while cementing The maintenance of circulation of the drilling fluid is essential to successful drilling by the rotary method. The drilling fluid or mud is supplied at the surface of the well in large earthen pits or metal tanks and is pumped from these into the bore hole through the drill pipe and the drill bit to the bottom of the hole. The mud returns to the surface between the drill pipe and the bore hole wall, bringing with it the drill cuttings. The circulation of the mud serves not only to carry the cuttings to the surface but also to cool and lubricate the drill bit, thus making possible the further effective penetration of the bit into deeper geological strata. In conventional drilling operation a drilling mud based on bentonite or other materials such cane fiber, ground walnut hulls, sawdust etc. is commonly used, but The solid organic materials used are difficult to keep suspended in the drilling fluid, being of a higher specific gravity than the fluid, while materials such as expanded perlite, though easily to suspend, become compressed to a specific gravity higher than that of the fluid under the bore hole. Furthermore, the commonly used materials lack adhesive power and are insoluble, and they have been known to become lodged in the wall of the bore hole so as to obstruct or seal off a producing oil or gas zone, thus causing a costly or even a complete loss of production. To prevent Lost Circulation is needed a material with following specifications:
All the common varieties of Gilsonite are substantially incompressible and have a specific gravity sufficiently near to that of water that properly sized granules of the Gilsonite can be readily suspended in aqueous liquid carrier.
Thus, Gilsonite is used for this purpose in powder. Particle size (mesh) is variable according to the characteristic of the well bore. Softening point is very important as Gilsonite must soften at a temperature above the temperature of well formation. The first patent, dated 1954, indicated the use of a Gilsonite with softening point from 150 to 180°C and mesh from 4 to 100.
Actually, with more technological devices, the most commonly used is 200/200 (softening point/mesh) type; by the way, Groupeve can supply Gilsonite in a range of 40/400 mesh and 140/230°C softening point.